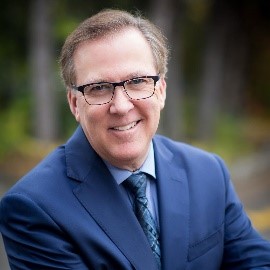 Bill Bell is President of Bell Financial Inc., founded in 1996 and based in Aurora, Ontario.

including wealth management, financial planning, insurance and observations of the human condition.

Some thoughts on playing to your strengths and knowing when to call in the experts.

The past 25 years have brought remarkable changes in how we all work and communicate with each other. Remember those giant computer systems of the early ‘90s that took up half your desk space? Advisor Bill Bell with the Ontario-based firm Bell Financial sure does, as it marked the beginning of the digital era for his company.

Fast forward to today, technology is just an ordinary part of everything we do. And if anything, we are more digitally connected than ever, thanks to the rapid mind-shift that enabled many of us to work from home during the height of the pandemic.

For Bill and his team, keeping up with technology has been a key driver for business growth, though he admits it hasn’t always been easy.

“Because of my age, I have a built-in aversion to technology – everything about technology drives me crazy,” says Bill. “So you’d think that I’d be stuck in the pen-and-paper days, but there’s just no way you can grow like that.”

Even though advancing technology may feel intimidating, Bill encourages advisors to step out of their comfort zone.

“My personal mantra has always been to help as many people as we can in the most profound way possible, and we couldn’t have done half of what we’ve done without embracing technology,” says Bill. “If you think you have the perfect situation and just want to maintain the status quo, then you’re living an illusion. You’re either growing or dying, and you have to figure out which one it is.”

Wading into new technology comes with a degree of uncertainty. Is it the right decision? Will it suit our needs? Upgrading the company phone system proved to be a major turning point for Bill, confirming just how important technology is to business success.

The phone system installed 25 years earlier was reliable, but there was a push to upgrade to a voice over internet protocol (VOIP) system.

“I was reluctant, because I really didn’t see the point of upgrading – our phone system was working just fine as is,” says Bill. “But what sold me on the idea of upgrading was when our phone service provider said this new system would follow me wherever I was located. I could be working from home and calls from the office would transfer through to me.”

The phone system upgrade went forward and then the pandemic shutdowns began.

“We did the changeover, and a few months later COVID-19 began. We all took our office phones home, and with the first call I made from my home office, I realized how important this new phone system was. Without it, we wouldn’t have been operating very effectively.”

In the end the upgrade was money well spent because, as Bill puts it, “Sometimes you don’t know what you don’t know.” And this is especially true when it comes to cybersecurity.

“The thing with cybersecurity and the risk involved is that we don’t understand it,” says Bill. “I understand putting locks on doors and keeping filing cabinets locked and not taking papers out of the office. But how can someone get into our system? What do they do with the information? Where does it go? I have no idea.”

Given the serious nature of client confidentiality and data breaches, Bill recommends that engaging the services of a cybersecurity professional should be an advisor’s top priority.

“We went with a cybersecurity firm to set things up for us, but we realized that’s not enough,” says Bill. “We had a consultant come in and do a security check for us, and that’s something that we’ll keep doing because things are always changing. We want to ensure that our company is doing everything to be as secure as possible.”

It all comes down to trust and doing the right thing, says Bill. “We recognize that cybersecurity isn’t our area of expertise, so you hire someone who knows what they’re doing. It’s basically what we tell our clients – we know about financial stuff, let us help you. In the end, we want to keep growing, and sometimes you need to spend money to keep things moving forward.”

Play to your strengths

Henry David Thoreau wrote, “If one advances confidently in the direction of his dreams, and endeavors to live the life which he has imagined, he will meet with a success unexpected in common hours.”

“This quote is a cornerstone of everything I’ve done throughout my life,” says Bill. “You have to know what you want, and then you have to pursue it. That’s it – it’s so simple.”

Bill brings this same philosophy into his advisor practice.

“My goal when talking with clients is to inspire them, and I’ve found the greatest inspiration comes from a client’s own vision for their future,” he says. “I help clients discover those dreams, or desires that may have been set aside because there just wasn’t enough money. And then I show them how they can build the life they want and help them stay on that track. It’s very inspiring, both for them and for me.”

“In the beginning, hiring staff may feel like a step back because you’re paying money out rather than keeping it in your pocket. While I eventually wanted a practice with four or five employees, I only needed one to start. As business grew, we put the pieces in place to support that growth.”

Building a strong business is more than just having the right office staff and technology in place. For Bill, the most important aspect is building strong relationships with clients: “I’ve always taken the approach with client meetings that I want to help the client figure out what they want out of life.”

Having a conversation where the client does most of the talking is the key, using questions such as:

“A conversation based on questions like these can help to formulate an idea of what the client wants. From there, we create a financial roadmap and see what’s possible. Ultimately, my main objective is to earn a client’s trust. I’m here to help,” says Bill.

Interested in learning more about better ways to work? Check out Manulife’s Art and Science of Focus, a series of free videos hosted by David Grice and featuring Bill Bell and other industry leaders.