With pensions, that is the question.

One in three recently retired Canadians (33 per cent) left the workforce earlier than planned, according to a recent survey.[1] Although that trend may slow in the face of rising inflation, advisors need to be ready for conversations with clients struggling to decide whether to keep their defined benefit (DB) pension where it is or move the commuted value into a personal locked-in retirement account (LIRA).

Commuting a pension effectively cuts ties with the employer, which may be important to a client on an emotional level – while also protecting against the risk that the employer could one day become insolvent. Commuting also generally provides clients with the opportunity to invest the money in a wider range of solutions.

A significant drawback is that the Income Tax Act sets a “maximum transfer value,” based on the client’s age, that can be transferred into a LIRA. Anything above that amount is taxed as income in the year it is received unless it can be deposited into a Registered Retirement Savings Plan (RRSP) with sufficient contribution room available.

In many cases, if there’s a tax hit on the commuted value of the pension – and depending on the interest rate environment of the time – it may be difficult for the invested assets to generate a high enough rate of return to outperform the DB pension if left where it is.

Fifteen years later, if both the transferred amount and the after-tax lump sum are invested, a 3.69 per cent annual compounded return would get the client to the $528,201 needed to buy $27,000 in indexed pension income (based on annuity rates in effect in October 2021). If the client spent the after-tax lump sum of $52,910, the annual compounded rate of return on the transferred amount would have to be 5.01 per cent to achieve the same result.

Indexed benefits can be especially hard to match if the indexing starts before retirement. With income indexed at 1.5 per cent for the 15 pre-retirement years in this example, the annual compounded rate of return required to buy the new amount of $33,756 in indexed pension income would be 5.23 per cent. If the client spent the lump-sum payment, the annual compounded rate of return on the transferred amount would have to be 6.57 per cent.

All those returns may be achievable – but one challenge with a commuted value is that the risk of falling short is in the client’s (and advisor’s) hands, rather than the employers.

In addition, taking the commuted value of a pension may mean losing health and dental benefits offered to retirees in the DB plan because your client could be considered “terminated” rather than “retired.” For DB plans that offer retirees additional benefits, the cost of purchasing those benefits independently should be factored in.

Of course, it’s critical to run the numbers for each client before deciding on the best path forward. This is an irreversible choice about a significant asset that may provide a substantial portion of the client’s retirement income.

Advisors add value by helping clients carefully evaluate their options and make well-informed decisions when they leave an employer with a DB pension plan. Here are some of the more common considerations when choosing between the two options. 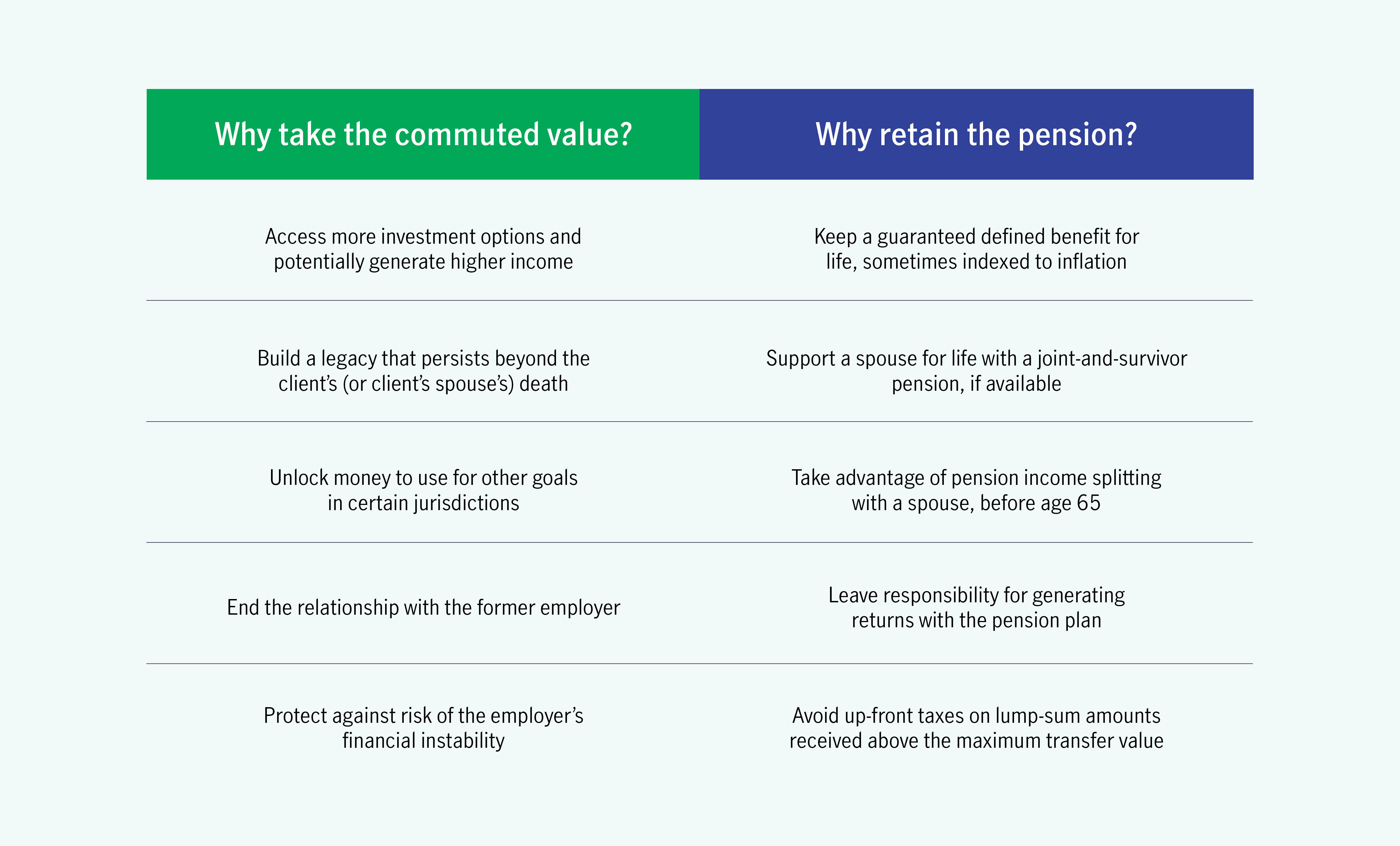 Asking clients these questions is a good starting point as you help them decide whether or not to commute: