How high net worth decisions can differ with insurance in the mix.

Working with a client’s accountant can be a terrific opportunity for collaboration. An accountant often acts as the “gatekeeper,” with the client relying on their expertise in helping to make decisions about their finances. But an accountant may not necessarily have a full understanding of how insurance products and services work – which is when challenges can arise. An advisor can be a beneficial partner, particularly when it comes to understanding how insurance can play a role.

Winding down a holding company

Consider this scenario, where an operating business has been sold, but a holding company is still active.

After selling his business several years ago, the client held a significant personal net worth, along with about $2.4 million of invested assets in a holding company. The client hadn’t drawn any income from the corporation in several years and had no intention to do so in the future. In fact, the client was thinking of shutting down the corporation, feeling that it was no longer needed.

The client was considering cashing in the investments, paying himself a dividend and then investing the remaining assets in his personal portfolio. This would certainly simplify his situation, because he wouldn’t have to file any more corporate tax returns. But cashing in the assets would also trigger a substantial tax bill, along with the dividend tax payable.

As an alternative to cashing out and closing the corporation, the client’s advisor realized this scenario could benefit from an insurance solution. The advisor involved had already sold the client a large personally owned joint last-to-die policy. A logical next step would be a corporate-owned tax-exempt insurance policy to shelter the investments.

Corporate tax returns would still be required – but avoiding the dividend tax on the money in the corporation could increase the net amount available to the client’s beneficiaries. The advisor felt it would make sense to run this scenario by the client’s accountant.

Manulife’s Tax and Estate Planning team was called on to provide three styles of post-mortem tax calculations on two scenarios to see how much money the estate would net after all taxes. The net estate was calculated based on each of the following options:

For the insurance, the client was presented with both a single life and a joint last-to-die option. Two different products were also considered: A Universal Life (UL) product with yearly increasing cost of insurance and a level death benefit to maximize the CDA credit and, a max funded Par policy. The insurance values were calculated using guaranteed rates  for the UL, and the current dividend scale minus one per cent for the Par product.

The big difference was that the UL policy provided a cash value that grew over time but then started to decline and had a higher initial death benefit. The Par product had a growing cash value all the way through to life expectancy and, ultimately, a larger death benefit even at the current dividend scale minus one per cent. 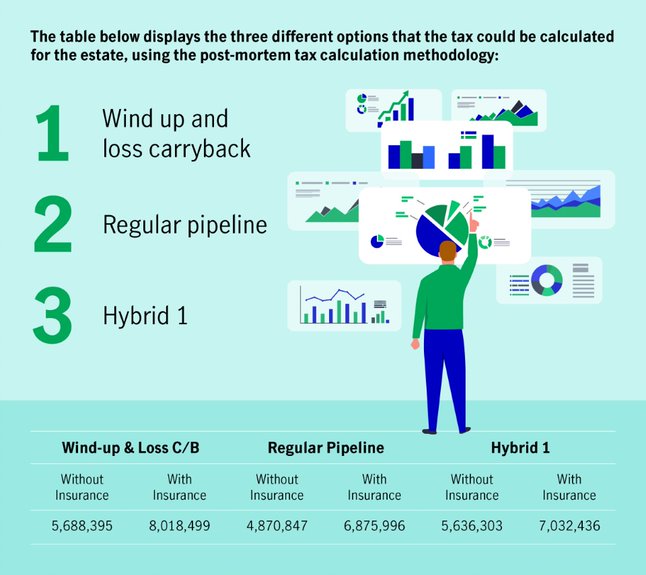 Regardless of which post-mortem calculation was employed, the net result was that the estate would end up with significantly more money when insurance was factored in. This increase was driven by the CDA credit created by the insurance policy.

The advisor shared this information and the assumptions that went into the calculations with the client’s accountant. The accountant agreed with the logic, calculations, and that using insurance made sense for the client. The client decided to proceed with the Par product, since he liked the idea of having access to a growing cash value if he needed it down the road. He also decided that the joint last-to-die option made more sense.

An accountant can be a great advocate

If you feel less prepared to discuss a client’s situation with an accountant, consider engaging other resources that are available to you. At the end of the day, if the planning makes sense for the client, and the accountant understands how it works, an accountant can be a great advocate for you. In complex cases, it’s good practice to involve the accountant in the process as early as possible.

Want to learn more about life insurance and corporations? Check out these resources: