Keep it in perspective.


Prices for everything from a pack of gum to a new house tend to rise over time – but that’s not all bad news. Inflation affects economies in both positive and negative ways. Whether inflation is good or bad really depends on the asset and the time frame.

This year, investors have been reminded that inflation and volatility are real. While these factors must be planned for, they should be taken in stride. Though we are seeing some inflationary pressure, it is mild by historical standards. Based on recent Purchasing Managers’ Index (PMI) data, the cost of inputs has risen but output prices have not1, perhaps because manufacturers have been reluctant to pass on their increased costs to consumers. If that pressure on margins continues, however, the output prices will have to be adjusted accordingly. To fully understand how inflation affects the marketplace, it helps to know the basics.

Most financial markets differentiate between headline inflation and core inflation. Headline inflation, which includes prices of commodities such as food and energy, tends to be more volatile and prone to spikes. Core inflation, which excludes these commodities, is what central banks focus on. “Central banks control inflation by raising and lowering interest rates. They generally target 2 per cent inflation as a healthy level of inflationary pressure. Below that suggests that an economy is running too slow; above that suggests that prices are moving faster than the economy can accommodate. Generally, most people are not concerned about inflation in a developed economy that’s running between 1 and 3 per cent,” explains Frances Donald, Chief Economist at Manulife Asset Management.

The current level of inflation is well within these “ideal” levels. In Canada, core inflation hasn’t been over 3 per cent since 2003,2 and in the United States, it hasn’t reached 2.5 per cent since 2008.3 With low unemployment and upward wage pressure, today’s inflation levels are a positive environment for the overall global economy.

The bright side of inflation

Still don’t like inflation? Remember, it beats deflation hands-down. Deflation occurs when a lower level of demand in the economy leads to an excessive drop in prices. It is less common than inflation and often coincides with high unemployment and economic depression.

One example of deflation is Japan’s “lost decade,” as the period between 1991 and 2001 is often called. This economic crisis was caused largely by speculation, fuelled by record-low interest rates in the 1980s. Stock market and real estate valuations exploded – some more than tripled. A three-square-metre area near the Imperial Palace sold for US$600,000.4

When the government raised interest rates in an attempt to calm speculation, both the stock market and the real estate market collapsed5. Debts that were backed by speculative assets went unpaid. The economic collapse also resulted in lower wages. Falling wages led to a decrease in demand, which led to lower prices. And while that might seem great for consumers, falling prices meant that people held off on spending for long periods because they knew if they waited just a little bit longer prices would fall further. This lack of demand did cause prices to fall further, perpetuating the downward spiral. Combined with interest rates that hovered near zero and a depreciating yen, deflation brought economic expansion to a standstill.

On the negative side

Granted, inflation doesn’t mean everything’s coming up roses. The double-digit inflation of the 1970s and 1980s, which peaked at 12.5 per cent, was challenging for Canadians.6 At that time central banks were behind the curve, oil prices were rising sharply and there was a lot of excess demand in the economy. The global structural factors that suppress pricing power today, such as e-commerce and the global supply chain, were absent. Companies had pricing power because consumers had fewer options.

Uncertainty over rising inflation may discourage investment and savings. If inflation is especially swift and unexpected, consumers may begin hoarding goods because they fear that prices will increase further, leading to shortages.7 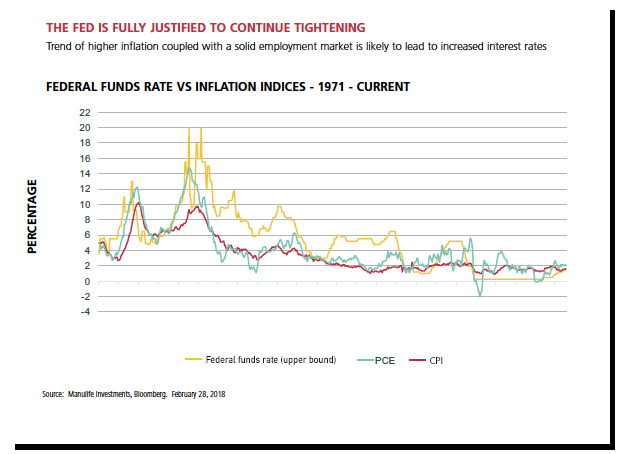 The impact of interest rates

This year, in Canada, while we’ve seen a turn in inflation expectations, they are still extremely mild by historical standards. The point is that it’s all relative. While some people may talk about inflation, they are talking about minor changes such as 0.1 and 0.2 per cent. These are not the types of rate changes that materially change the way people approach financial markets. “These are incremental changes that are relevant because we were stuck in a very, very narrow range for many years,” says Donald.

Nevertheless, higher inflation tends to lead to higher interest rates. “I would speculate that interest rates and inflation will both be in a bit of an upswing over the next couple of years, and therefore, while we’ve enjoyed above-average returns out of the equity markets over the last five years, we should expect below-average returns – although still positive, because we don’t see a recession,” explains Philip Petursson, Chief Investment Strategist, Manulife Investments. 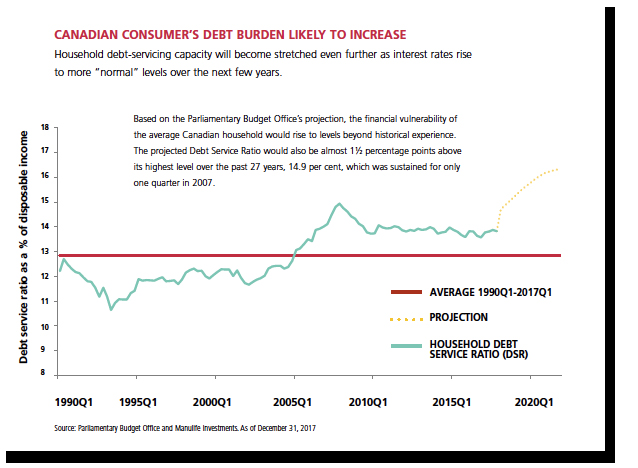 Naturally, when people have to put more aside to pay down debt, they have less money to spend on other things – like eating out at a restaurant or other fun stuff. Another negative aspect is the potential for a rise in defaults and delinquencies on debt, since some people simply won’t have the funds. “A financial imbalance will exist in the Canadian economy for quite some time until Canadians reach a point where they actively deleverage, and the best way to measure that is through the debt service ratio,” says Donald. The debt service ratio is the percentage of the disposable income of a household required to pay the interest and principal of its debts, including a mortgage. “It’s been running around $14 out of every $100 for almost a decade now. As rates continue to rise, what we’re likely to see is that each month Canadians have to put more and more aside to pay for the debt they’ve already taken out,” Donald explains.

Where do we go from here?

In general, rising interest rates means that bonds lose value. Portfolio managers like Terry Carr, Chief Investment Officer for Canadian Fixed Income, are managing such risks by “dialling back credit risk and lowering duration. In the post-crisis period we were as high as 60 per cent high-yield bonds in the portfolio. Now we’re about half that, at around 30 per cent. We have increased exposure to floating-rate loans that deliver enhanced income in a rising interest period and, like the Federal Reserve, will likely pass through three or four (rate) increases this year.” Floating-rate loans are generally higher in the capital structure than other debt and equity instruments of a company. “Ultimately we want to decrease the overall duration of the portfolio … move up in credit quality and shorten duration.”

More importantly, will the rate of inflation change the pace of rate hikes? “That’s entirely possible,” says Carr, “but more likely, if we see one more hike by the Fed than expected (four instead of three), then you’re borrowing from the first part of 2019 … I think we’re in the sixth or seventh inning of rate increases, and by a year and a half from now, we’re done.”