The idea that an investor would pay to lend money over any period, much less over 30 years, was more or less academic before 2009. In that year, in the depth of the financial crisis, Sweden’s central bank cut its overnight deposit rate to –0.25 per cent. The European Central Bank (ECB) and the Bank of Japan (BoJ) followed suit in 2014 and 2016, respectively, marking their policy rates down to negative territory and bringing the concept of negative yields firmly into the mainstream of monetary policy.

Today, the vast majority of bonds in Europe and Japan – over 30 per cent of all investment-grade debt in the world – carry negative yields to maturity. Nor is the phenomenon limited to short maturities: in August 2019, Germany sold 30-year sovereign debt at a negative yield for the first time. The €824 million bond issue will pay zero interest and will return just €795 million in principal when the bonds mature in 2050.1 Even some corporate bonds now trade at negative yields.

The scale of the situation becomes much greater when inflation is taken into account. While in September 2019 more than US$17 trillion in global debt traded at negative nominal yields, in real terms the figure jumps to nearly US$36 trillion and the phenomenon extends beyond Europe and Japan.

In fact, more than US$9 trillion of U.S. government debt now trades at yields below the rate of inflation.2

The era of negative-yielding debt has arrived.

How we got here

There are a number of explanations for why we’ve entered this alternate fixed-income reality, but the primary driver is central bank policy. In Europe and Japan, traditional monetary policy, including near-zero reserve rates, has proven incapable of stimulating economic growth. Now those central banks are trying to force lending and inject money into the economy by effectively penalizing commercial banks for storing their reserves. The associated decline in currency values is another deliberate economic stimulant in those countries where exports are crucial to growth.

Beyond policy rates, ongoing quantitative easing by central banks is pushing up the prices of longer-dated bonds and pushing down yields. Bond buying by the ECB and BoJ has been so substantial that it’s effectively crowding out private debt ownership, reducing, for example, the portion of available sovereign debt in Germany and Japan to just 31 per cent and 57 per cent, respectively.3

Exacerbating these issues is investor demand for income. Yield-starved investors are chasing after income wherever they can find it, bidding up the prices of sovereign bonds. This cohort includes institutional investors with investment-grade mandates, but also demand from passive strategies with fixed allocations to sovereign debt. At the end of November 2019, a stunning 22 per cent of the Bloomberg Barclays Global Aggregate Bond Index carried a negative yield, led by the index’s sovereign allocation, of which 31 per cent was negative yielding. Negative-yielding bonds represented nearly 40 per cent of the BofA Merrill Lynch Global Government Bond Index.4>

The safe-haven status of government bonds plays a role, too. Sovereign debt continues to represent a risk-free asset, so fearful investors who don’t like what they see on the economic horizon are accepting negative yields in exchange for safe harbour. Some are betting that they’ll earn a positive return as negative yields get even more negative in the future. We’re seeing this latter strategy grow more popular among momentum investors.

Our new normal of low-to-negative yields is having a ripple effect across capital markets and the real economy. In the first six months of 2019, some US$250 billion in cross-border capital flows came into the United States, pushing down U.S. yields but also stretching the valuations of bond proxies, such as real estate and utility stocks. Japan has been a particularly large net buyer, accounting for roughly US$300 billion of bond and equity purchases on an annualized basis in 2019.5 Where investors are finding positive-yielding bonds, they’re adding duration risk to make the most of it.

Credit risk is also on the rise, with investors generally moving down in quality to pick up incremental yield. Far from late-cycle euphoria, however, investors have been discerning about how much credit risk they’ll take. The long, muted recovery hasn’t inspired much confidence, and today’s investors seem skeptical that the credit cycle can sustain recent returns. So, while the broad trend has been to take more credit risk, higher-quality credits have outperformed the most speculative credits.

The era of low interest rates has also sparked a widely reported explosion in corporate debt issuance. U.S. corporate debt now exceeds US$15 trillion, more than double the previous peak reached in 2008 and approaching 75 per cent of GDP.6> While higher debt issuance isn’t necessarily a problem if economic growth continues and rates stay low, it significantly increases tail risk scenarios if growth were to slow materially. Spreads are severely compressed in many areas as a result of today’s yield-chasing dynamics, and in some cases we believe investors are not being fairly compensated for the risk they’re taking. Add to this scenario the growing uncertainty surrounding trade, Brexit and the 2020 U.S. election, and we can imagine corporate debt becoming a source of outsized volatility.

A sharp downturn isn’t our base case, but if it were to happen it would be especially painful. A pullback in the United States that pushed credits to junk status would force selling by institutional managers and likely trigger home country–bias repatriation. With their balance sheets at or near all-time highs, rates low to negative and bailouts unpalatable, central banks no longer have the tools they once did. Liquidity is generally not an issue – until it is.

CENTRAL BANK BALANCE SHEETS ARE AT OR NEAR ALL-TIME HIGHS 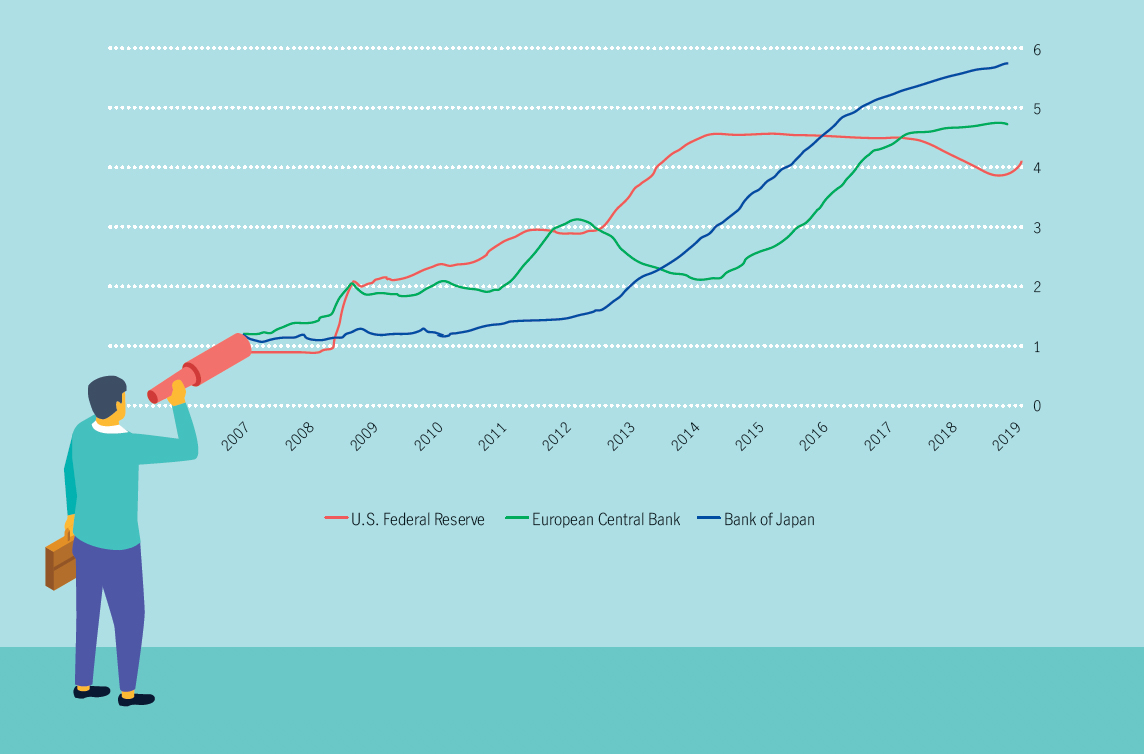 NEGATIVE YIELDS ARE LOSING THEIR EFFECTIVENESS AS A GROWTH DRIVER 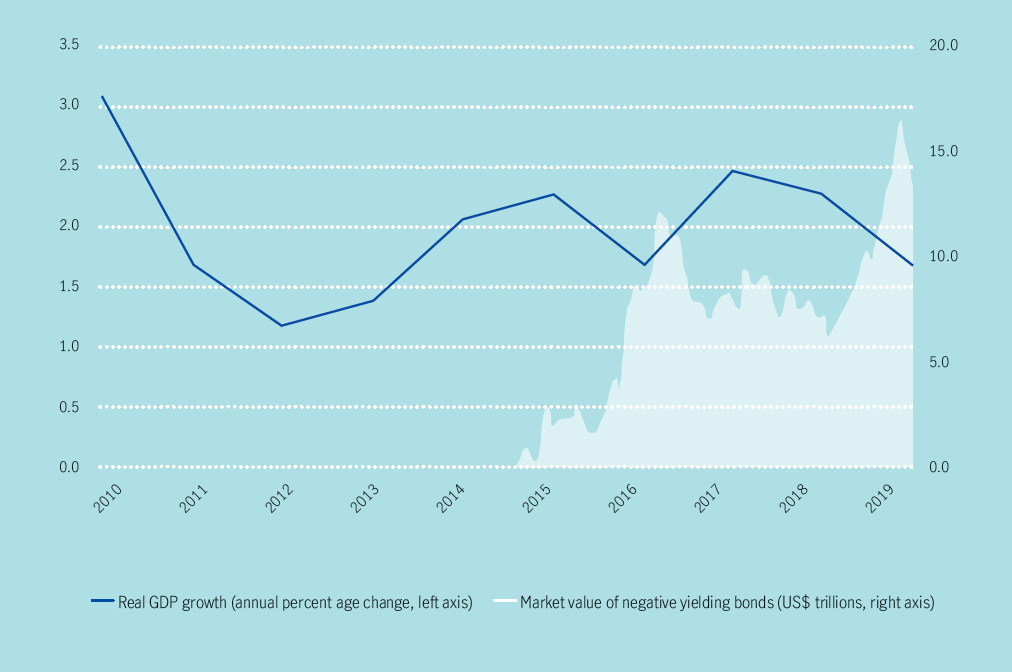 Negative rates may not worsen, but they'll persist

There are a few reasons why we believe negative rates won’t expand significantly from here. For starters, sub-zero rates aren’t working as well as policymakers had hoped. Five years after crossing the proverbial interest-rate Rubicon, signs of economic success in Europe and Japan remain fleeting. Unemployment remains high across much of Europe, capital spending hasn’t rebounded much, and GDP growth appears to have stalled. Meanwhile, inflation has actually weakened in Japan, despite all the stimulus, and it remains well below the 2 per cent target in both regions.

Negative-interest-rate policy has also had a number of undesirable side effects in the real economy that policymakers are keenly aware of. Today’s low-rate regime has hurt savers, pensioners and anyone else relying on deposit-based income, while proportionately benefiting equity and real estate investors. Policymakers are concerned about the formation of asset bubbles as well as the growing income inequality between savers and those who have access to capital.

Negative rates have also squeezed the net interest margins of banks, which pay a penalty to store excess reserves but are unable to pass on negative rates to depositors (who would deposit money in a negative-yielding bank account?). European banks have lost more than a third of their market capitalization since January 2018 as a result.7 Some central banks have even reported that commercial depositors have asked to store cash in vaults to avoid being penalized by negative rates.

In the corporate sector, negative rates can also create a moral hazard of sorts as companies confuse cheap financing with sound capital investment, or as marginally profitable companies remain in business due purely to the low cost of capital.

Despite the many flaws of negative-interest-rate policy, investors should expect low-to-negative rates to persist for some time. Inflation rates remain stubbornly below policy targets across many developed markets, with massive debt burdens, globalization, aging demographics and technology-related price deflation all applying downward pressure. Aging demographics alone may imply structural changes to inflation and yields, with lower levels of household formation on the one hand and greater demand for fixed-income assets on the other. 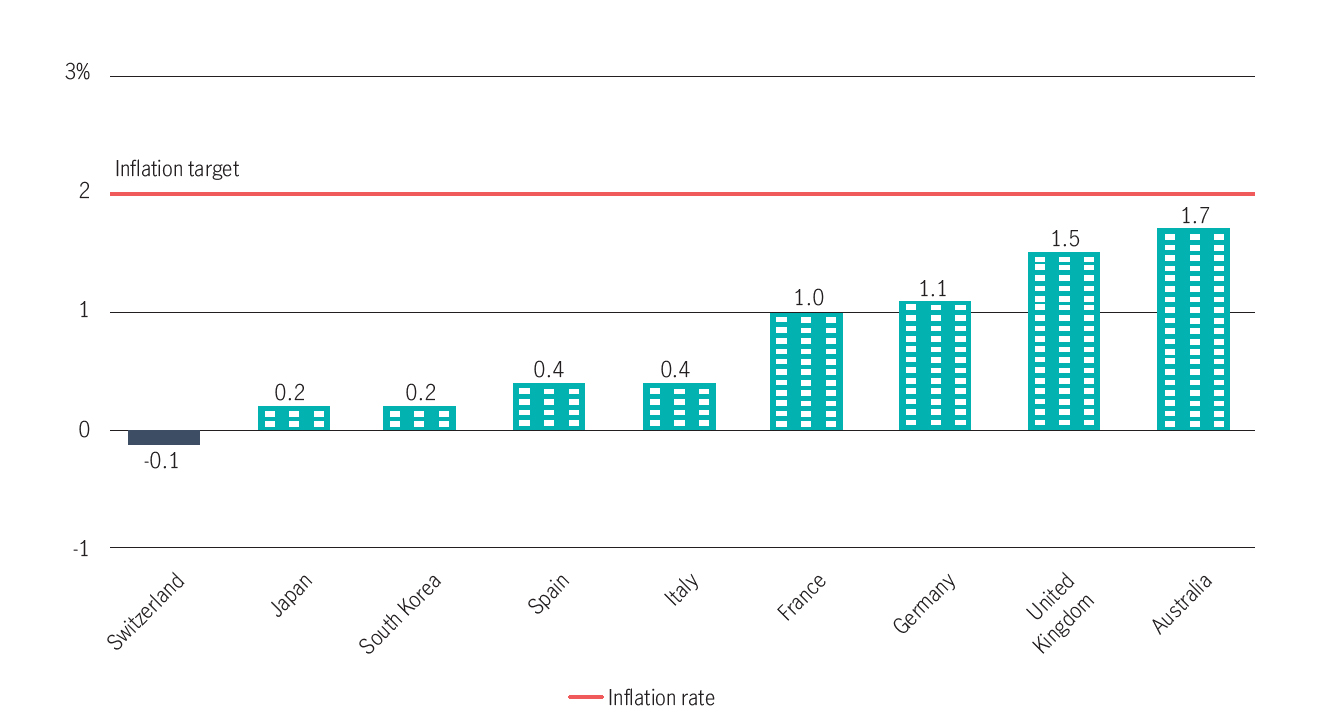 Opportunity exists for those who know where to look

There are no silver bullets for operating in today’s environment. In a world of low-to-negative interest rates on risk-free assets, fixed-income managers will need to get creative. We believe generating income today is a fundamentally active endeavour that requires both a global research footprint and deep expertise across a wide range of less-traditional strategies.

In my 30+ years of investing experience, I’ve found there are always places in the world where things are improving on a fundamental basis, and there are countless opportunities for actively generating income across geographies and the capital structure. The successful fixed-income manager of the next decade will have the depth of skill and the breadth of capabilities to do just that.