Shifting demographics and the investment sector.

Canada, like much of the industrialized world, is going through a major demographic shift with an anticipated economic impact. For the first time, there are now more people over the age of 65 than under the age of 15. To learn more about the financial implications of an aging workforce, Advisor Focus sat down with a number of Manulife experts.

When we calculate our potential growth rates for an economy, there are two primary factors. The first one is how many people are working (labour force participation rates), and the second is how productive each one of those people is (productivity).

What we know in Canada is that the proportion of the population available to work and contribute to the growth of the economy is much smaller than it has been historically, and that has been driven by the labour force participation rate being depressed by the aging population. There are more people retiring than staying on. 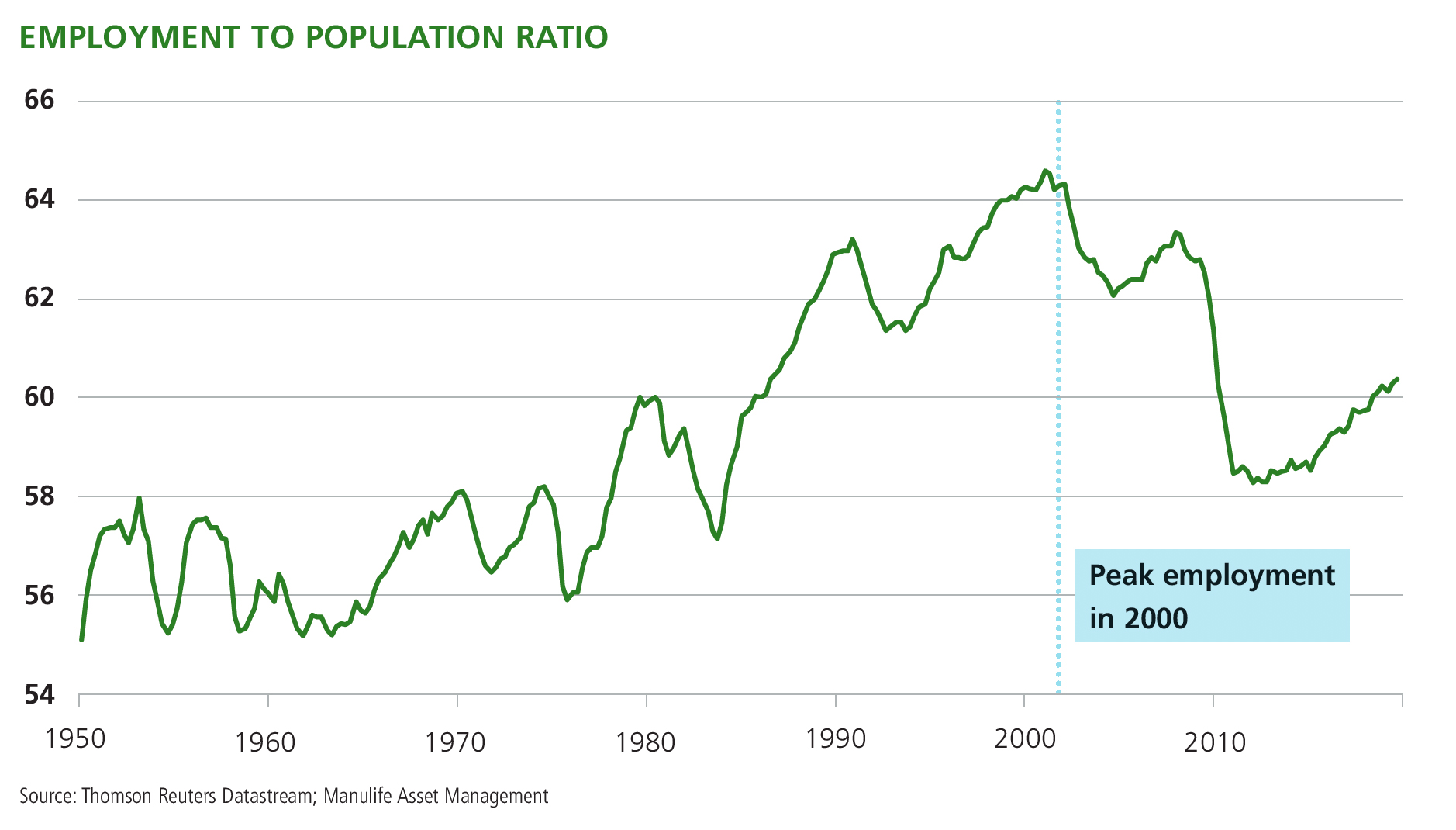 There are additional demographic dynamics at play, particularly in the United States, where issues that seem small have become large enough to move the dial – elevated incarceration rates, disability rates and even the opioid crisis. Low birth rates and longer life expectancy also contribute to economic outcomes.

Another factor is the growing number of young people entering the workforce. Typically, the longer you’ve worked, the more money you make and the more productive you are. If the workforce as a whole is getting younger, it’s very unlikely that we’ll see wages grow as quickly as they otherwise would. It’s also unlikely that we’ll see productivity numbers grow as quickly.

For example, if you’ve been in your job for 40 years, you’re probably better at it then someone who has been at it for a few months. It’s also safe to assume that the more experienced worker likely earns more than the entry-level person. So the aggregate data measuring younger workers has ramifications for wage data and productivity data which, in turn, imply that interest rates and inflation will likely be lower over time. 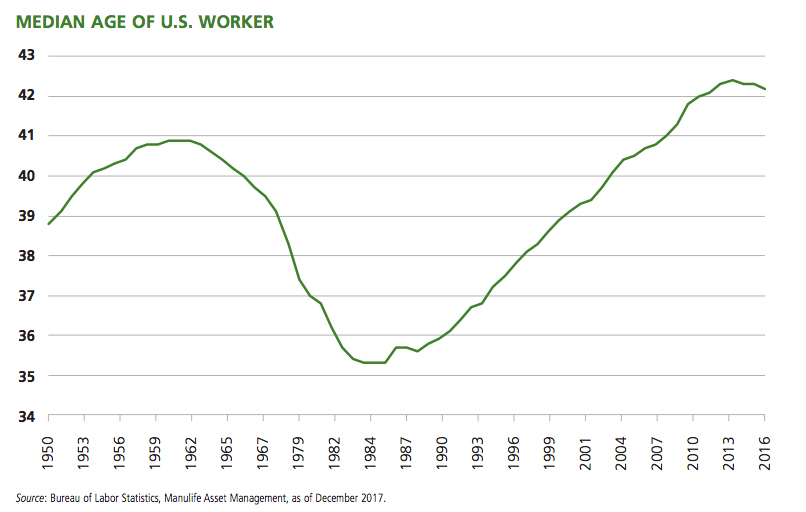 However, in 2017 Canada led the Organization for Economic Co-operation and Development (OECD) countries in population growth. How? Through immigration. What’s interesting about this country’s immigration profile is that Canada also has the highest flow of workforce-ready newcomers. These are immigrants that are most likely to join the labour force when they arrive. So this development in Canada has helped us support and offset some of the impacts of aging demographics, and help produce growth levels over the longer term that are more supportive of better performance for companies and general demand.

The Canada Pension Plan (CPP) is very well managed for the demands that are going to be placed upon it in the coming years, but I do think retirees will need to pay attention to their retirement income goals.

The outlook for fixed income returns is quite muted compared to, say, the last 30 years, in which fixed income has been in a prolonged bull market. If retirees believe that fixed income or bonds will meet their full retirement income needs, I think they are going to be disappointed. In a low interest rate environment, which I think will persist for years if not decades, investors will need to continue to rely on equity market growth in addition to equity-issued dividends in order to meet their retirement income goals.

In retirement, it really comes down to cash flow needs. I think boomers will need to look at other investment vehicles beyond just bonds in order to meet their cash flow requirements. This is where dividend yields remain attractive. Preferred shares that have a high dividend also remain attractive.

When economic growth slows down, it will have an impact on the returns for investment portfolios. I like to quote a McKinsey and Company study published a couple of years ago.* The consulting firm looked at the rates of return on various types of investments over the past 30 years then extrapolated those same kinds of rates of return over the next 20 years. To simplify things: their conclusion is essentially that you should take the historical rates of return and cut them by half.

People generally look for more conservative guaranteed investments as they age, but the problem is those investment options are generating significantly less return. Annuity payments are substantially lower due to low interest rates.

I think everyone agrees we don’t expect CPP or OAS (Old Age Security) to completely support someone in their retirement. It’s supposed to be a nice complement, but other assets are required. Some of these individuals won’t have defined benefit pension plans. And as Canadians face an increased life expectancy, it can make it hard to properly plan for a potential longer retirement. It comes down to spending less, or earning more.

There is little doubt that the demographic changes unfolding in Canada and other countries around the world are set to have a significant impact on the economy, but in the face of challenge comes the opportunity for positive adjustments. The question to ask is, Will countries simply accept the possibility of a shrinking economic base, or find creative new ways to accelerate growth? For example, technology has the potential to make up for worker shortages, while also creating more robust balance sheets for companies. 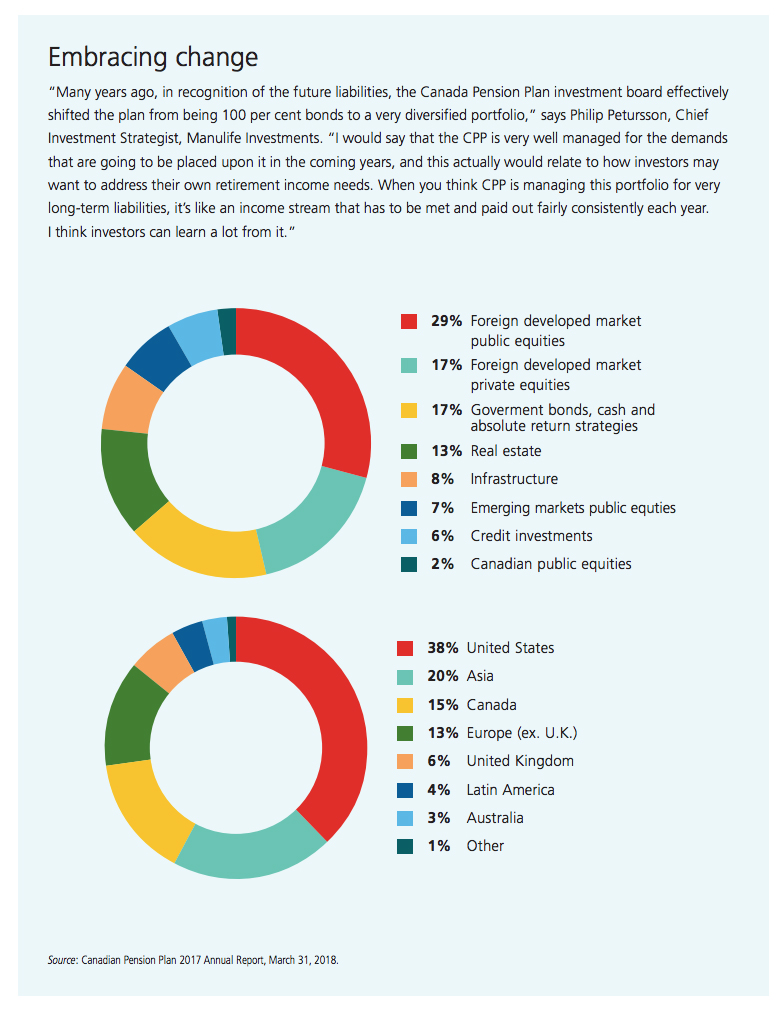 Rather than worrying about stagnation, this may very well be an opportune time for economic leaders to consider new policies, programs and products that allow our aging population to thrive. And advisors have the opportunity to get ahead of the curve on these shifting economic strategies, by forging strong relationships with clients to help them understand the changes ahead.